Focus on continuous cover forestry at meeting in Tjäderberget

Every year, SCA holds reference group meetings in its conservation parks. These are meetings of SCA employees and representatives from authorities, organizations and local residents who are engaged in some way in the development of the park. At the end of September, it was once again time for a meeting in the Tjäderberget conservation park, located between Umeå and Lycksele in Västerbotten.

“There was a good turnout with participants from the Västerbotten County Administrative Board, the Swedish Forest Agency, the Swedish Society for Nature Conservation, the Swedish University of Agricultural Sciences (SLU), the tourist association and Holmen. Some people had followed our work with the park for several years and we received many good viewpoints on how we should develop the park’s values,” said Ulf Hallin, one of SCA’s nature conservation experts and the person responsible for Tjäderberget. 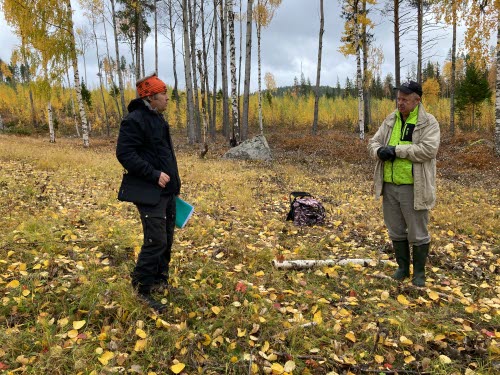 The meeting opened with a review of the measures carried our since the previous meeting.

“We have performed about 10 hectares of thinning to benefit deciduous trees and cleared a 1.5 kilometer path that has since been marked out. We have also graded roads in the park,” says Ulf.

The group then visited two areas where SCA is planning, together with the Swedish Forest Agency, to create demonstration areas where different continuous cover methods will be tested. Continuous cover forestry on forest land with production targets means the forest is managed so the land is always wooded without the creation of any larger clearcut areas, and includes various forms of single-tree selection, group selection and in shelterwood cutting so that the forest feeling is retained.

“The Swedish Forest Agency looks upon continuous cover forestry as a complement to clear-cut forestry on a limited part of the forest land, and that continuous cover forestry should be more widespread when motivated from an environmental, cultural heritage or management viewpoint or with regards to recreation values and reindeer herding. This is about managing the forest without clearcut spaces where the forest is always wooded at the same time as producing and periodically harvesting timber. The park contains a few suitable areas where we can create several demonstration areas and test and evaluate different methods,” says Ulf and continues:

“The areas are yet to be harvested, but hopefully this will take place next year. Over an area of seven hectares, we will create gaps in a grid pattern with squares of 30x45 meters. One of the areas will test a selection forest with spruce after felling is carried out. Another area contains plenty of small pine seedlings and the aim here is also to thin so younger pines are offered better development potential. We will then create small gaps in one area so the existing undergrowth of birch is given more light and nutrients and hopefully will become the dominant tree species. If the trials are successful, the forests of the future will be more stratified and of different ages compared with the forest here today.

After lunch, the group visited the old forest worker cabin in Sjölunda. It is open for visitors who want to spend the night, and old stables.

“We have just renovated the stables so it can survive the passage of time for a few more years,” says Ulf.

“Last Christmas, we were visited by two Czechs who had hitchhiked here and spent the night in the rest hostel,” says Andreas Renöfält at SCA Forest, who found the visitors’ comments in the guestbook. 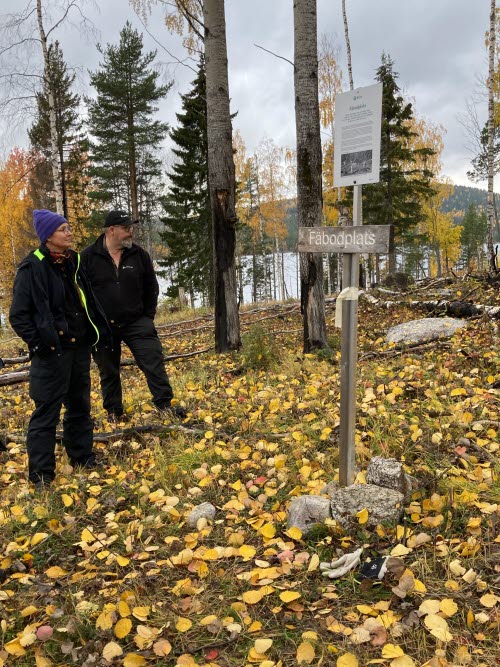 Management of the meadow

The group then walked along a one-kilometer path to the summer pasture area in the park.
“Here we discussed management of the meadow and problems with root suckers from aspen that appear in the meadow. Several people in the group contested that we should continue to cut the grass of the meadow land, preferably every year, and let the aspen remain. It was also suggested that the trunks cleared from the meadow should be dragged into piles to ensure that the brash does not risk fertilizing the meadow, which could cause it to decompose and the meadow flowers to disappear. I’m very satisfied with the suggestions we received.”

During the autumn, SCA also cleared young stands in a three-hectare zone around the summer pasture area to encourage deciduous trees, such as aspen and sallow.
“The participants were positive to the measures and now we just hope the moose don’t find the area, so the trees can continue to grow,” says Ulf.

A number of new paths have been created in Tjäderberget conservation park over the past year. Ulf Hallin has prepared a new map of the park that will be published shortly on SCA’s website.

“The response to the map was very positive, and that we have marked more paths. Paths attract visitors who are keen to walk in the woods safely. What remains is to present the paths a little better so visitors know how long the paths are and what they are likely to see during their walk.”

Ulf was pleased with the meeting.
“It is very positive that we have our reference group that can give us various opinions and proposals. We would be happy to collaborate with other groups with respect to developing the park.”